Master Thesis in Architecture with a specialisation in Spatial Experiments on the Department of Architecture and Build Environment, Faculty of Engineering at the Lund University.

The Moon is very far from Earth, it has extremely harsh environment and the lunar missions might be long. Yearning for family and friends left on Earth would be an impactful psychological discomfort for astronauts. That is why an idea for a lunar habitat which would soothe this effect is needed. 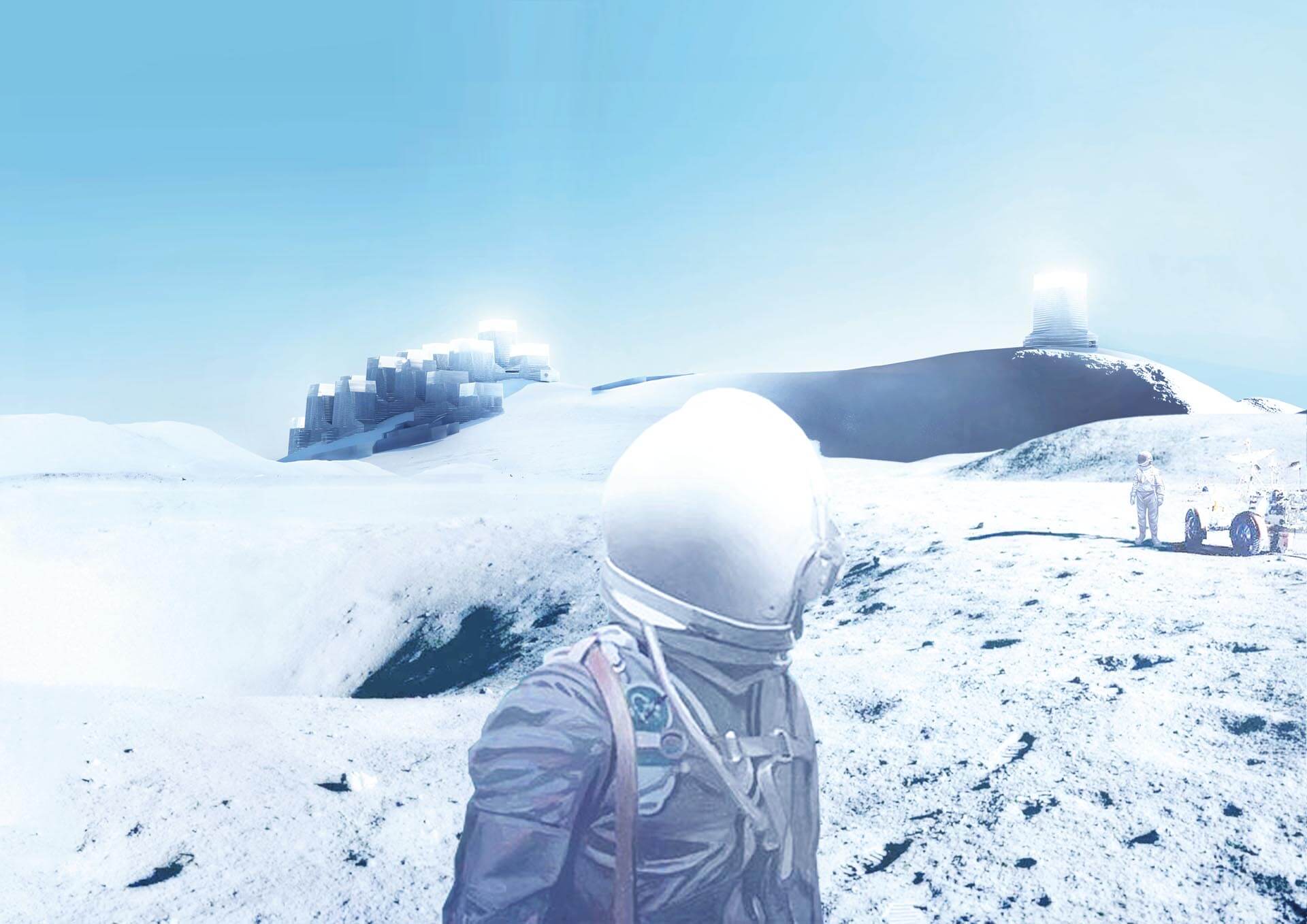 The Lunar Light House project was developed to provide a novel system of protection against cosmic radiation specifically for a surface Lunar base. It’s main target was to find a technical solution which would allow for more freedom in shaping the base structure and also potentially for introducing natural sun light.

At the time of developing this project, there seldom were any ideas as to how to protect ourselves from radiation on Lunar bases. The shielding could not be brought from Earth because it would mean a lot of additional weight. That is why a reliable In-Situ Resource Utilisation method seemed to be the only option. When it comes to Lunar bases regolith – a loose layer of soil – could be used as a protective shield.

Lunar regolith had very good properties for this purpose, but on the other hand, covering the structures with it would diminish the flexibility of shaping the building. The other idea was to dig in the ground or to look for already existing caves. For example, recently big lava tubes were discovered on the Moon. From the radiation protection perspective this solution presented itself as very efficient, however it did not make introducing natural sun light possible.

That is why a different solution had to be found. One that would use regolith as material and allow to shape the base freely at the same time, while not making the payload too heavy. A new idea had been developed while researching. With the use of synthetic biology or bacterias to 3d print and grow, a support structure for the regolith could be created in-situ. The protective shell against radiation could take more various shapes and allow for more freedom in design.

The base had to consist of two structure systems. The first one was needed to ensure life support - a tight structure, able to hold pressure, temperature etc. There was no known way as to how to produce such a structure In-situ and thus the project proposed bringing inflatable components from Earth. Torus-shaped modules could be stacked vertically, one on top of another, creating a habitat for the crew with all of the necessary functions, laboratories, greenhouses, workshops etc.

The other structure, the main focus of the project, would work as a shell for the pressurised modules. It's primary purpose was to ensure passive radiation shielding..

For that an In-Situ grown bacterial nano-cellulose was used. It was a light solid substance that had exceptional strength characteristics. It was lightweight,stiffer than Kevlar R , electrically conductive and non-toxic. It had very high tensile strength - 8 times that of steel. Also, or maybe above all, it might have been translucent, which was a great asset when considering the introduction of natural light to the habitat.

Together with the lunar regolith, nano-cellulose membranes would create a composite system, based on the soil reinforcement principles. Inclusion of sheets within the soil mass would stabilise unstable slopes and help to retain the soil on steep slopes and under crest loads. Additionally, to ensure lateral stabilisation, nano-cellulose reinforcement was designed as a continuous surface, climbing in a form of a spiral along the whole structure, instead of being divided into separate layers. Thanks to that, Lunar Light House could be built tall and stable without the use of as much material..

The base would be localised on the rim of Shackleton Crater, on the lunar south pole. What made it a good potential site for the lunar base is that the crater stayed in shadow almost all the time. This meant that ice could be found there. Despite the fact that the crater is dark and cold the crater rim itself is located at the 'peak of eternal light', with a sun light present for almost 90% of the time. This location possibly provided both ice and sunlight which made it an optimal choice. 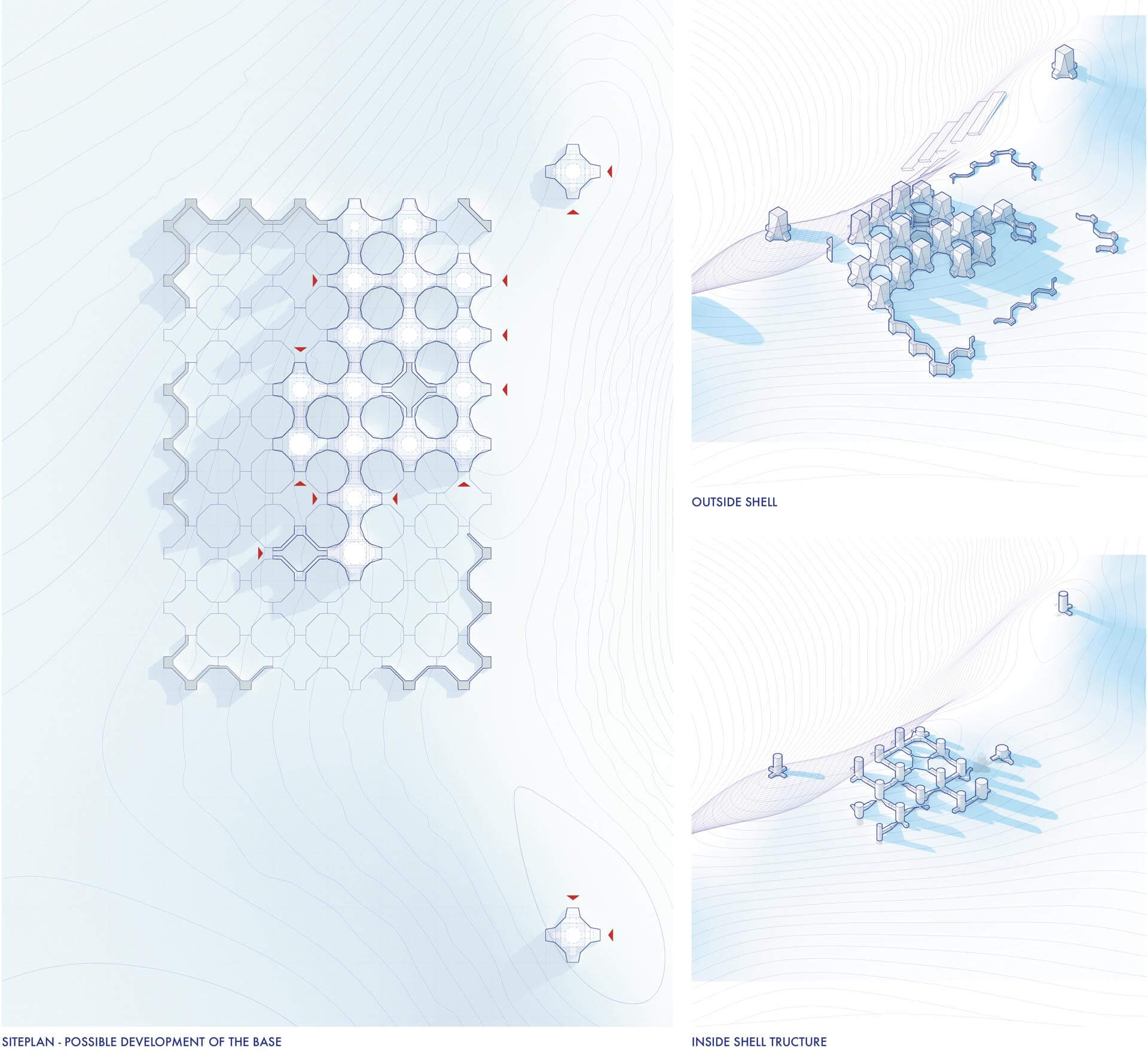 The Lunar Light House project proposed a novel way of using already existing systems and materials, bringing new qualities and possibilities. First, one tower would be built and with time the site would become a moon village. The height of the structures built on the Moon would overcome the obstacles created by dust floating above the surface raised by the vehicles' engines and mechanical works. Additionally, with a site in the peak of eternal light and with the nano-cellulose membrane placed all along the structure, the sun light would gradually pass inside, having its climax on top of the structure. To keep the crew in the best health, there had to be an artificial light system to simulate day-night cycle on Earth inside the habitat. However, on the last floors of the base there was a transparent module placed,on the level where there was no dust anymore. The density of cellulose layers there was the biggest and due to the height, sun light would shine on the top all the time.

Yearning for family and friends left on earth would be an impactful psychological discomfort for astronauts. The transparent module on top of the base would make watching the home planet possible. This would provide a reassurance that home is still there and would have a soothing effect on astronauts’ nerves

Translucent nano-cellulose not only would transmit light to the base but also light up itself, making the top of the base clearly visible from the outside. During external activities the base would become for astronauts what a Light House was for sailors. 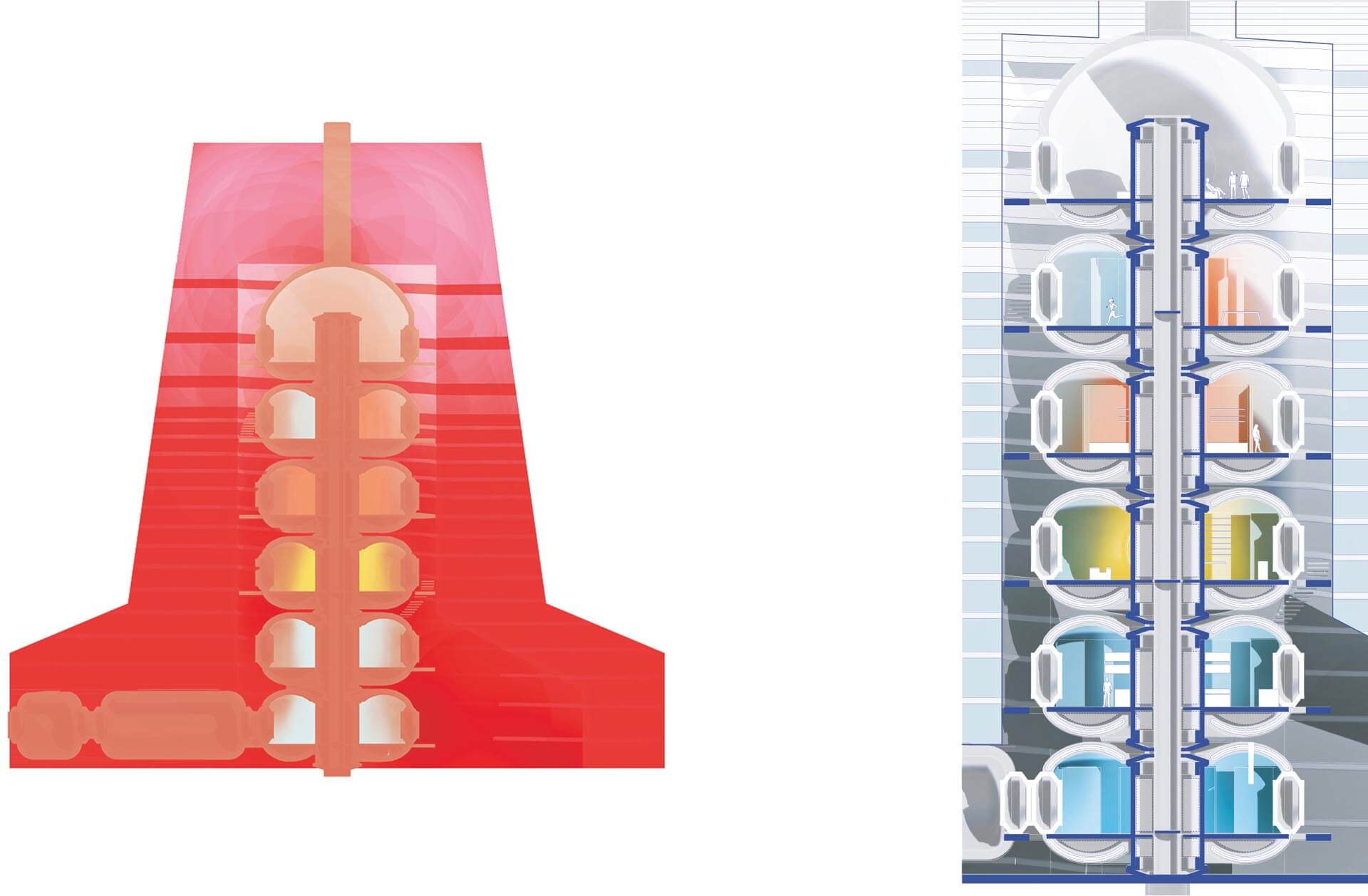 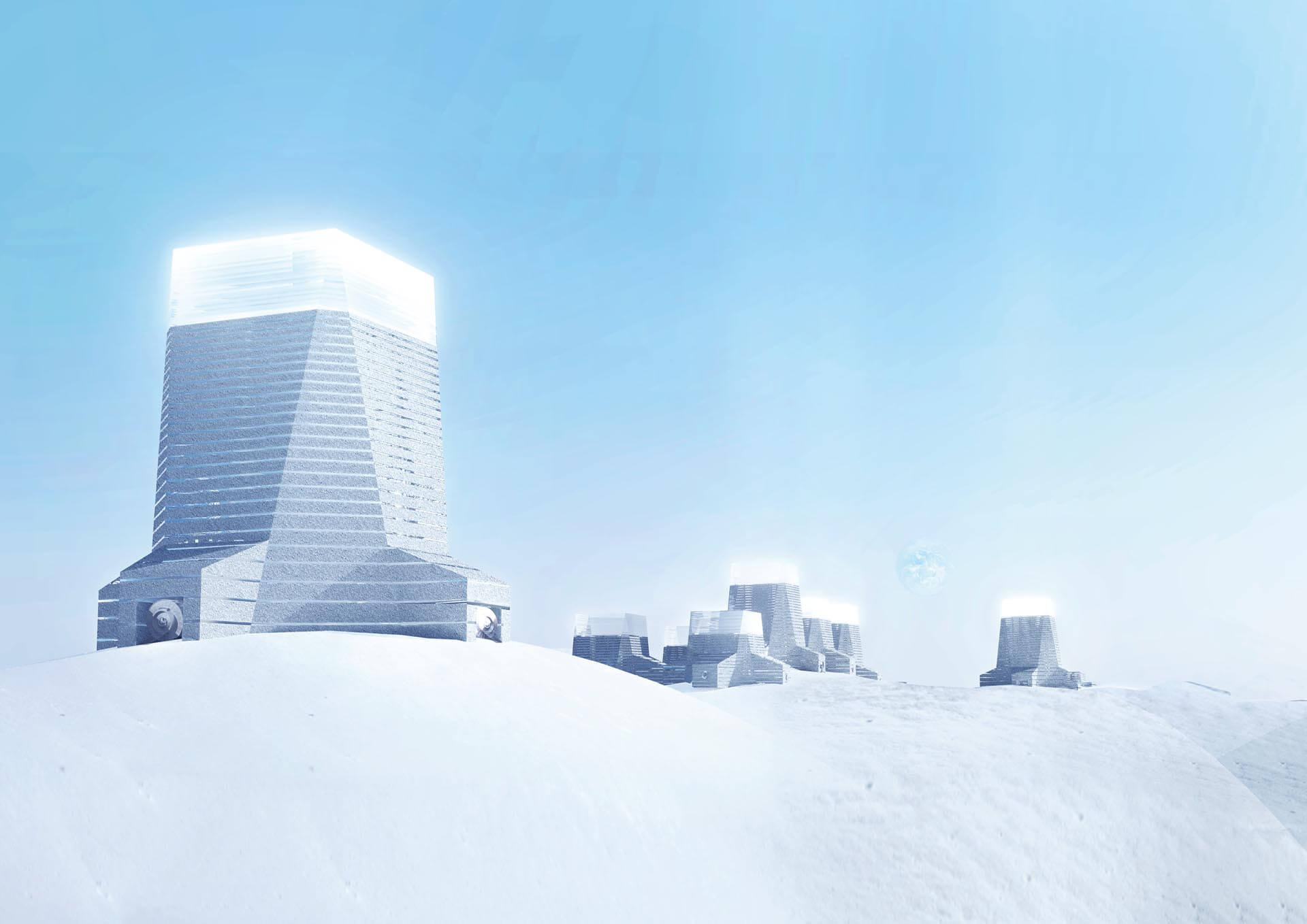 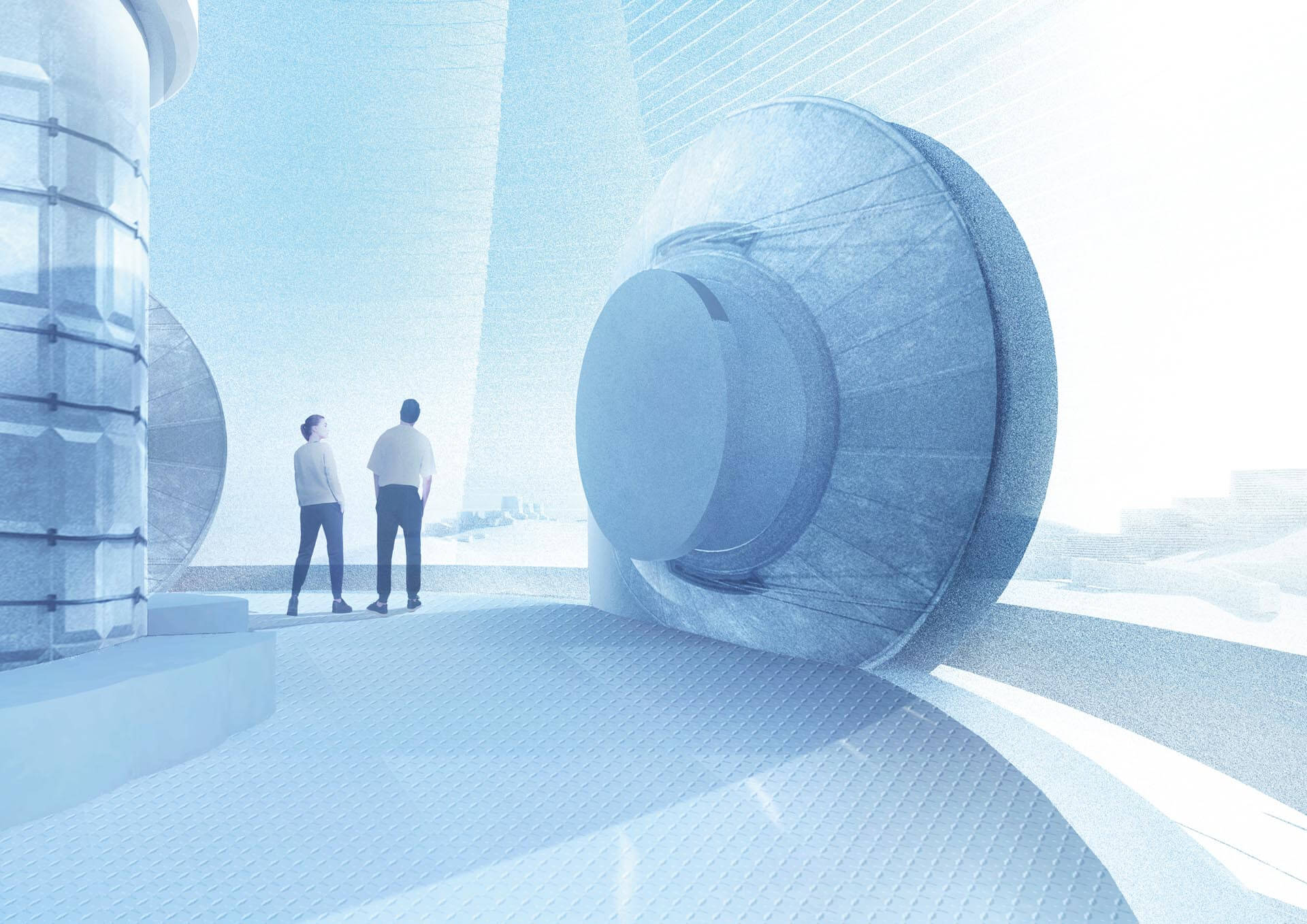 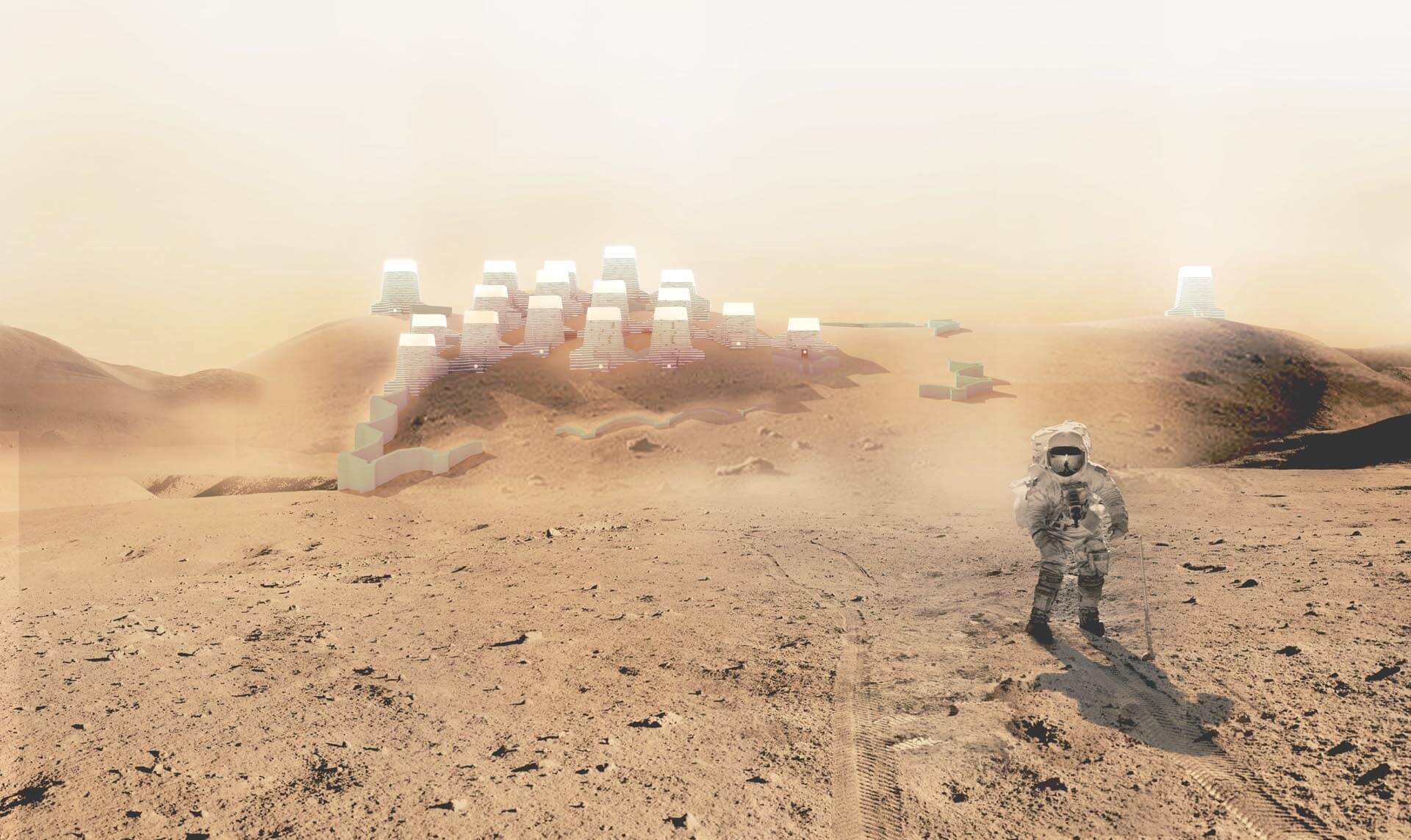 The concept can also be translated into a Martian base, thanks to the martian atmosphere which is composed mostly of carbon dioxide, which is crucial for in-situ growth of nano-cellulose.